In mid-April 2011, nearly a year after becoming a 3-legged raccoon, Wizard has reluctantly checked-out of his Rehab Hilton. During many months of captivity, he more than earned his keep by patiently raising several litters of orphaned raccoons like a kindly old uncle…

Wizard was particularly bonded to a timid, brain-damaged coon named “Little Guy.” Whenever I visited, Wizard quickly tucked Little Guy behind him, stood on his hind legs, growling and hissing a warning not to come any closer. Nothing could ever take the wild out of Wizard. And nothing would ever harm Little Guy as long as Wizard was around!

When the long-awaited evening of liberation finally came for Wizard and the others, Little Guy was secured in a small crate inside the much larger raccoon enclosure. Too handicapped to survive in the wild, he‟d have to stay behind. 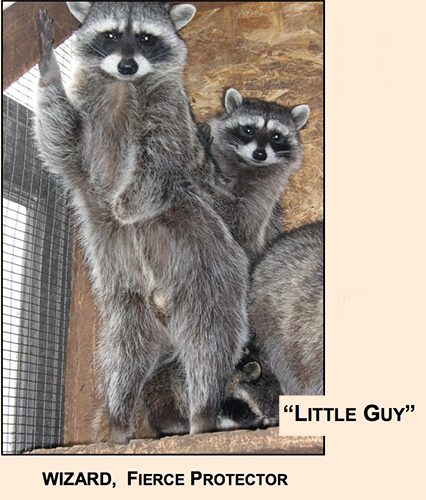