I was on my final homeward loop through the urban forest when a most unlikely vision stopped me in my tracks. Blinking several times to confirm what I thought I saw filled me with wonder. There, in the cool shade beneath an ancient Juniper, a middle-aged man reclined far back in his wheelchair, gazing toward the clear azure sky.

I scanned the surrounding area, expecting to find a caretaker nearby but there was no one else around. “Good morning!” I called into the shadows.”How are you doing today?”

The man’s eyes moved toward the sound of my voice, a crooked smile lighting his handsome face. I stepped closer then, explaining that I came to the forest almost every morning to pray. With enormous effort, he slowly formed the words “I… do…too…” and thus began my very special friendship with Randy.

Life had dealt Randy a very harsh hand at birth― severe cerebral palsy. To date he has spent 56 years in walkers, hospital beds and wheelchairs, unable to control little more than subtle movements of his left hand, eyes, chin & mouth (with which he artfully “drives” his customized wheelchair & all manner of other technological devices.) Randy’s world might have been exceedingly restricted and small, but his HUGE, unfathomably courageous spirit simply wouldn’t allow it! 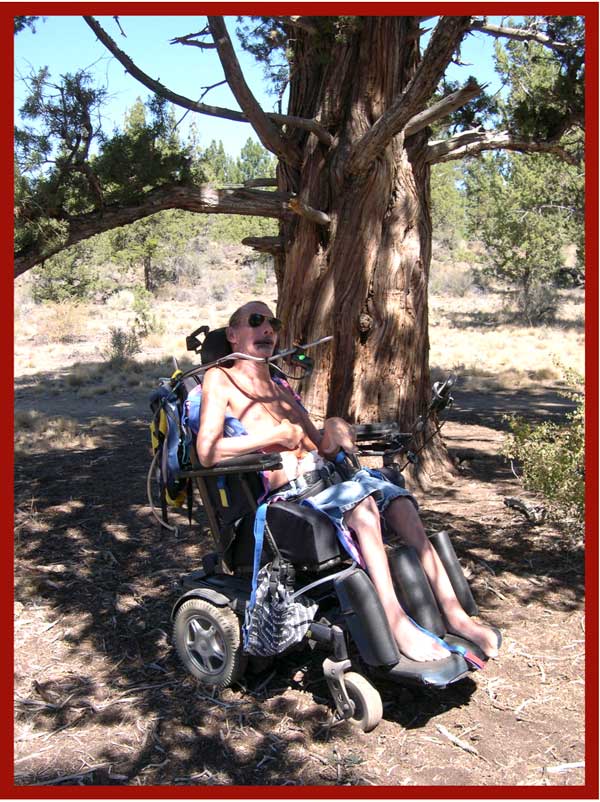