A few years back, I created a series of small rock cairns *(see photo) atop the long line of giant boulders that separate my driveway from the adjacent public walking path. Countless children travel this route to and from school each day― and so, no sooner had my mini-masterpieces risen than did they fall to much counter-productive “sport.”

For weeks I simply rebuilt my cairns every morning, fully resigned to their predictable toppling by sunset. One afternoon I was outside in the Sanctuary Garden pulling weeds when a particularly boisterous band of youngsters approached. Somehow I just knew these were my cairn culprits.

“Hi!― how ya’ doing?” I called out to the group of eight, mostly pre-teen boys. Only one muted acknowledgement returned. “Hey, have you guys noticed those little rock towers along here?” I asked. Suddenly eight cats were caught ingesting eight canaries. Busted! I simply couldn’t help myself then, as this was clearly a teachable moment . . .

“Do you know what those are?” The obvious ring-leader, a tall gangly lad, mumbled a smart reply under his breath. His sidekicks snickered nervously. “Actually, they’re called cairns. Ancient people marked trails with them,
but the ones I build here are prayers & blessings for people who are very sick. “The whole pack suddenly halted in stunned silence. Ah, respect was not dead after all.

“Cairns can also teach us about living in balance,” I explained. “You know, it always takes a lot more skill to create something than it does to just knock it down.” My trap was set. “Come on, you think you can build one of these?” I motioned to the cocky leader who eagerly took my bait. His admirers gathered close around.

Three stones, a collapse. The pressure was on. Three more stones, another collapse. Things got downright serious then, but the stones refused to cooperate. Instantly the entire pack dispersed, each boy selecting a nearby
boulder on which they would now prove how it’s done. 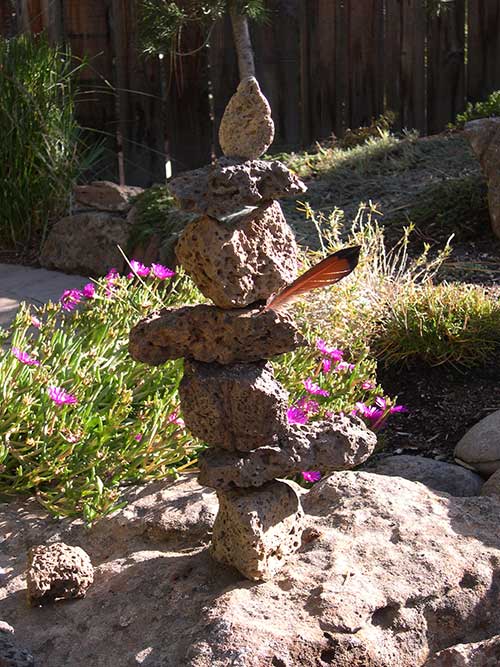 I was grinning (internally) from ear to ear, celebrating how easy it still is to turn mischievous young minds in a positive direction. “Whoa! Look at that one!” I kept cheering them all onward until eight magnificently unique
rock cairns finally graced the public pathway.

“Very cool, you guys… you’re good! It takes most people a lot longer to master this…” They stood back, beaming at their accomplishments. “Tell you what― every time you pass by here, why don’t you build some more cairns?
I’d like to see what you can do.”

For a week or so, I had more amazing cairns than I could count! And then one morning I opened the gate to find fistfuls of stones scattered all across my driveway. Forward momentum requires steady reinforcement and these kids
hadn’t gotten it. For now at least, they were done! Until we know something about finding our own balance, our
own “still-point,” we can’t ever hope to live this Sacred Principle, or teach it to our children, or heal our dangerously imbalanced world.

Building rock cairns is one of the quickest and most enjoyable ways I know to learn about centering & balance. These most ancient relatives of ours, these wise Stone People, have a great deal to teach us. But is “modern”
humanity teachable? This remains to be seen…

One of these warm spring days, head out into some glorious wild country with family & friends… and GET STONED together! Please send me some photos ― YOU KNOW “I’d love to see what you can do!”